Crematorium for HM King Bhumibol Adulyadej of Thailand nears completion, the largest ever

BANGKOK: HM King Bhumibol Adulyadej, was the longest serving monarch of Thailand, who selflessly served his people for 70 years. His passing in 2016, has united the country in grief. He was for many of us living in Thailand, the only King we had ever known. Fondly called ‘Father’ he was the spiritual and physical head of a family of 71 million people. Many thought of him as a living god.

The Kingdom will begin the five-day royal cremation ceremony next month.

The country’s military government has budgeted THB 3 billion (US $91 million) for the funeral.

Huge crowds are expected near a vast crematorium being constructed at Sanam Luang, a park in the heart of Bangkok close to the Grand Palace. The cremation itself is scheduled for the 26th October, 2017 when according to Buddhist beliefs the deceased monarch will ascend to heaven.

HM King Bhumibol Adulyadej was revered throughout his kingdom, a kingdom he rarely left. He explored every part of Thailand. He was often seen in the rice paddies and jungles. Always taking notes and often seen with a map and a camera around his neck. He wanted to visit every inch of his kingdom. Everywhere his subjects were present – many in remote corners or high in the mountains.

The King was an expert on water management systems; an inventor, a musician, a devote Buddhist, an intellectual, visionary, diplomat, elder statesman, entrepreneur and a peacekeeper.

People bowed and prostated themselves before him and always proffered a deep wai (the Thai greeting with the palms pressed together in a prayer-like fashion) not just as a sign of respect but out of a deep sense of love and devotion. His picture graced almost every home and every building in Thailand. Never had a King been so respected.

His passing at 88 years old (born 5th Dec 1927) was a deeply sad period in our history. The country shunned bright clothes; buildings and public places were adorned in black and white, the mood was sombre and calm. Black ribbons and armbands are still a common sight.

Thousands have queued daily since his death, to pay homage and make their final respects to their King. Many standing for hours in stifling heat or seasonal rains to shuffle past the King’s remains – silent, respectful and for many…emotional.

Not surprising the country’s largest-ever Royal Cremation platform has been built. And as is tradition golden chariots have been repaired and adorned. Ready to carry the beloved King on his final journey.

Hundreds of master craftsmen have toiled for thousands of man-hours, crafting exquisite pieces in wood from timber especially chosen for the occasion. Thailand is preparing a grandiose final farewell to its beloved late King in a way not experienced by most living Thais.

As per tradition, wood from the rare and fragrant Mai Chan Hom tree, a Kalamat (similar to sandalwood) from the Buri National Park in Prachuap Khiri Khan, will be used in the funeral of HM King Bhumibol Adulyadej.

The royal tree which was selected to be used in the royal funeral is already dead, one of 12 lifeless yet standing Mai Chan Hom trees. The use of the fragrant and auspicious tree is a custom that can be traced back to the Ayutthaya period.

Trees from the park were used in the funeral of the late Princess Mother in 1996 and for Her Royal Highness Princess Galyani Vadhana in 2008.

The tress are protected. Anyone can plant them but special permission from the Ministry of Natural Resources and Environment is required before they can be felled.

The Royal Crematorium, Phra Merumat, where Buddhists believe the Late King will ascend to heaven, has been built on the grounds of Sanam Luang, a vast green park to the north of the Grand Palace.

A spiritual as well as historical landmark of the city, Sanam Luang has been used as the funeral ground of kings, queens, princes and princesses since the beginning of the present Chakri dynasty of the Rattanakosin era (1782). The last time Bangkok saw a royal funeral pyre was at the cremation of Her Royal Highness Princess Bejraratana Rajasuda in April 2012.

But the royal cremation of His Majesty the King will be a majestic farewell, unprecedented in scale and historical gravity. The last time a Thai king was cremated was 66 years ago, when King Ananda Mahidol was cremated in March 1950 at Sanam Luang. 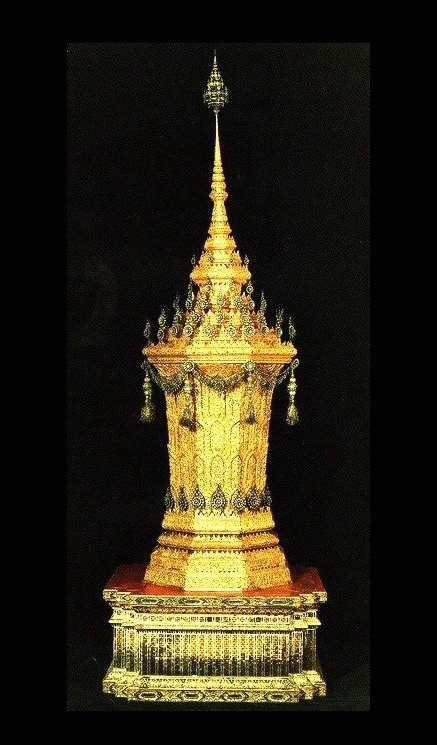 After the royal cremation, the royal urn is expected to be kept for an exhibition in the National Museum Bangkok like the previous royal urns of the late Princess Mother and Her Royal Highness Princess Galyani Vadhana.

Although nearly a year has passed since the revered monarch’s death, his presence is still strongly felt. The grand cremation ceremony will take place during October 25-29 and will draw thousands of Thais to the Thai capital. They will come from the length and breadth of the kingdom. Hotels in Bangkok are expected to be particular busy.

The crematorium complex measures 31,000 sqm. At it’s centre is the golden crematorium. The square structure measures 60m by 60m and is 50m high, surrounded by water in recognition of the King’s work with the country’s water management systems.

On the 26th October a coffin carrying King Bhumibol’s body, will be brought here and elevated to the top platform of the crematorium to be incinerated in an electric oven.

Able to accommodate up to 7,000 people, including members of the royal family, government officials and foreign guests, the complex will be majestic and regal. The magnificent Grand Palace will be its backdrop. The general public will not be allowed inside during the funeral but will be able to visit after the rites. 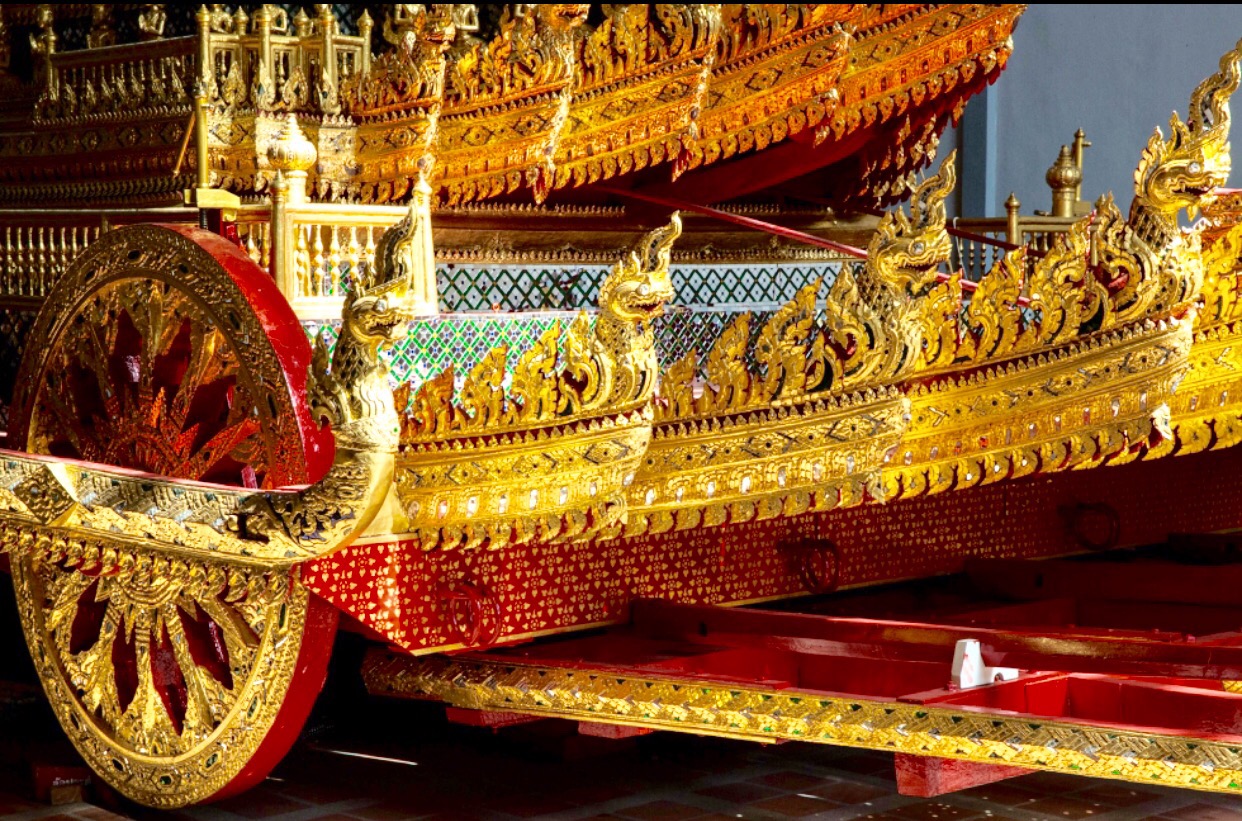 At the Bangkok National Museum, a short walk from Sanam Luang, artists are busy restoring the grand chariot and other carriages that will be used in the procession. The grand chariot has been used since the days of Rama I, the first king in the current Chakri dynasty which was founded in 1782.

King Bhumibol was the ninth king of the dynasty. Thailand moved forward from a mainly agricultural society into Southeast Asia’s second-largest economy during Bhumibol’s time on the throne. Now, the key drivers of the economy are exports, such as cars, food, and tourism.

King Bhumibol died on the 13th October 2016. The monarch, who took the throne in 1946, had come to symbolise continuity. During his reign, the country had more than two dozen prime ministers and 10 military coups.

The restored golden chariot to take Thailand’s late King on his final journey is being restored by workers in Bangkok. Built of wood and decorated with gold and mirrors, the 13.7 tonne chariot is 18m long, 11.2m high and 4.8m wide.

Pulled by 216 men, it will carry the ornate urn containing King Bhumibol Adulyadej’s body to the site of the cremation at Sanam Luang. It was last used in 2012 for the cremation of Princess Bejaratana Rajasuda, the late king’s cousin.

Having lived in this country for over a quarter of a century I feel, with a few exceptions, that a peaceful contemplation has descended across the country. In the past the country has been racked by tumultuous political scenes as it struggled with democracy. However, the nation draped in sadness mourns together.

English born Andrew J Wood, is a freelance travel writer and for most of his career a professional hotelier. Andrew has over 35 years of hospitality and travel experience. He is a Skal member and director of WDA Travel Co. Ltd and its subsidiary, Thailand by Design (tours/travel/MICE). He is a hotel graduate of Napier University, Edinburgh. Andrew is also a former Executive Committee Director of Skal International (SI), National President SI THAILAND, Club President of SI BANGKOK and is currently SI AA VP Southeast Asia and Director of Public Relations, Skal International Bangkok. He is a regular guest lecturer at various Universities in Thailand including Assumption University’s Hospitality School and most recently the Japan Hotel School in Tokyo.