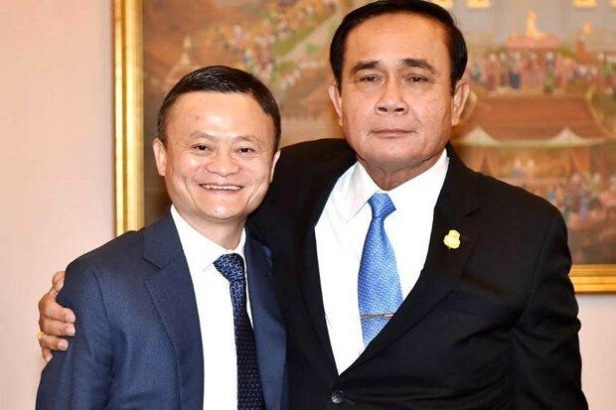 Alibaba Group Holding Limited is a Chinese multinational e-commerce, retail, Internet, AI and technology conglomerate founded in 1999 with a hugely successful e-commerce and on-line shopping business via web portals, as well as electronic payment services, shopping search engines and cloud computing services. It owns and operates a diverse array of businesses around the world in numerous sectors, and is named as one of the world’s most admired companies by Fortune.

During his meeting in Thailand Alibaba Mr Ma met Thai Prime Minister Prayut Chan-o-cha, Deputy Prime Minister Somkid Jatusripitak and the rest of the Thai government’s economic team to discuss their future cooperation and the group’s investments in the country. The Chinese e-commerce giant agreed to help SMEs, startups and farmers in Thailand by getting them more digitally connected through its platforms.

The Bangkok Post reported that they also discussed plans for a smart digital hub that will be developed in the Eastern Economic Corridor (EEC).

Groundbreaking is expected this year and the zone will be fully operational next year.

Alibaba hopes to set up hubs across the world that will together make up an electronic world trade platform (eWTP) complementing the World Trade Organisation framework. Users of the hubs enjoy minimal tariffs, speedy customs clearance as well as state-of-the-art logistical support.

“With the eWTP our vision is to make the world more inclusive, sustainable and to support developing countries, small and medium sized companies as well as young people,” Ma said.

Also speaking at the event, Thai Deputy Prime Minister Somkid Jatusripitak said the Chinese e-commerce giant’s latest foray in Thailand would be a major shot in the arm for the country’s US$45 billion eastern economic corridor.

The Thai government has said it hopes the vast project will help lift annual economic growth to 5.0 per cent by 2020 from its 2017 growth rate of 3.9 per cent.

Investors in the economic corridor enjoy tax breaks and can rent land parcels for up to 99 years.

4•Alibaba’s 11 billion baht  investment in a smart digital hub in the EEC.

“China is on its way to becoming the world’s largest consumer, driven by rising income and a growing middle class of 300 million. There is no better time than now for trade-oriented countries to seize this opportunity to export to China as the country continues to open its doors wider for global trade,” Mr Ma said after the meeting.

He also praised Thai agriculture products and its digital prospects.

“Quality Thai agricultural products such as fragrant rice, durian and other tropical fruits in particular are sought after by the Chinese consumer,” he said.

“Given Thailand’s unique strengths in people and culture, we are confident of its future and growth potential.

“We are committed to being a long-term partner of Thailand to help enable its digital transformation,” the Alibaba co-founder added.

Gen Prayut said cooperation with the Alibaba Group will enhance the country’s e-commerce development and would be good for growth.

“The group believes Thailand has the potential to become an e-commerce centre in the region, which conforms to government policy. This also helps to develop the economies of neighbouring countries,” he said.

“This cooperation will assist local community businesses and help farmers increase their income as logistics will be much improved and farm products can will able to be shipped within 24 hours,” Gen Prayut noted.

The prime minister said Thailand and China can also generate income through a digital platform for tourism that Alibaba and the Thai government have agreed to develop.

Mr Somkid said Alibaba’s investment in the smart digital hub will be an important platform to link Thai SMEs, Otop (One Tambon, One Product) items and farm products to China and the global market.

The EEC Office signed two of the four MoUs Thursday, according to Kanit Sangsubhan, its secretary-general. TMall is Alibaba’s business-to-consumer marketplace.

The first covers cooperation with Alibaba’s e-commerce subsidiary in Singapore to drive exports of Thai farm products and other goods to the global market, starting with rice and durian.

To mark the deal, the Thai Rice Flagship Store was launched on Tmall.com to promote Thai rice to Chinese customers. Tmall.com, formerly known as Taobao Mall, is Alibaba’s business-to-consumer marketplace.

The Commerce Ministry expects up to 45,000 tonnes of high-quality rice will be exported via e-commerce channels this year, rising to 120,000 tonnes in 2019.

The second MoU was signed with Alibaba Group’s Cainiao Smart Logistics Network Hong Kong Ltd and focuses on the smart digital hub in the EEC.

This will utilise Alibaba and Cainiao’s world-class data and logistics technologies to boost cross-border trade not only between Thailand and China, but also other markets, the group said.

“The cooperation will open a great opportunity for Thailand and enhance trading in Cambodia, Laos, Vietnam and Cambodia,” Mr Kanit said.

The first concerns an agreement between the Tourism Authority of Thailand and Zhejiang Fliggy Network Technology Co.

They will create a Thailand Tourism Platform to facilitate travel bookings and room reservations in the country to give hotels, shops and restaurants a wider audience of Chinese travellers.