LONDON: Gloriana is a 90-foot-long (27 m) British royal barge. She was privately commissioned as a tribute to Queen Elizabeth II for her Diamond Jubilee, and was the lead vessel in the Thames Diamond Jubilee Pageant.

The idea for a waterborne tribute to the Queen for her Diamond Jubilee came from her eldest son, Charles, Prince of Wales, and Lord Sterling.

A former Executive Chairman and now Life President of P&O Cruises, Lord Sterling not only help fund the project but also managed it. The estimated £1.5m construction cost of the project was completely privately funded.

Gloriana was presented to the Queen and Her Majesty named the Royal Rowbarge ‘Gloriana’ as a lasting legacy to mark her Diamond Jubilee.

Her Majesty asked that Gloriana be retained by a new charitable trust with assistance from Thames Alive and has decreed that Gloriana will be used to promote better use of the Thames. This will be achieved through providing opportunities for Royal-supported, and other charities, to play their part in occasions and celebrations upon the Thames, with a particular emphasis on events involving young people.

Gloriana is powered by 18 oarsmen and two electric inboard engines, and can carry an additional 34 passengers and crew. The design is inspired by Canaletto’s London paintings of 18th-century barges.

Construction began in November 2011. The team responsible  consisted of naval architects and the build team was led by master-builder Mark Edwards of Richmond Bridge Boathouses, who was later awarded an MBE, for services to boatbuilding, heritage and the Diamond Jubilee.

The barge is built of wood using traditional methods and includes flooring from sweet chestnut trees from Prince Charles’s estate.
The Queen officially named her on 25 April 2012, during a visit to re-open the restored Cutty Sark in Greenwich.

Gloriana was the lead vessel in the Thames Diamond Jubilee Pageant, a parade of over 1,000 boats and ships down the River Thames in London, organised as part of the Diamond Jubilee celebrations. Among the 18 rowers were Olympic gold medallists Sir Steve Redgrave and Sir Matthew Pinsent.

One million spectators watched from the banks of the Thames. The pageant was broadcast live on TV around the world.

Gloriana led members of the Royal Family other than the Queen and her husband Prince Philip, Duke of Edinburgh, who were aboard the 210-foot-long (64 m) MV Spirit of Chartwell, a motorised barge. 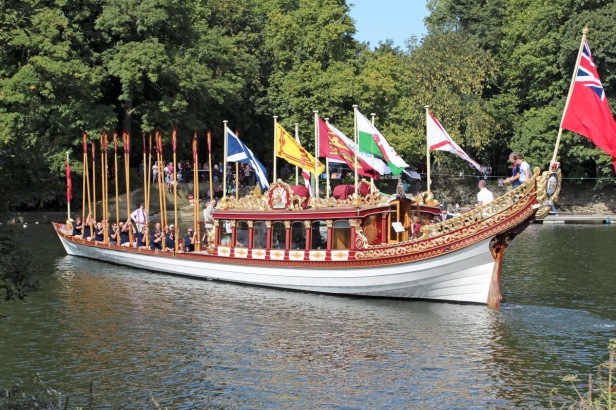 During the Diamond Jubilee pageant Gloriana carried eight flags, those of the four home nations: England, Scotland, Wales and Northern Ireland,  the flag of the City of London, the flag of Cornwall, the flag of the Royal House of Stewart and the flag of Tudor King Henry VIII. 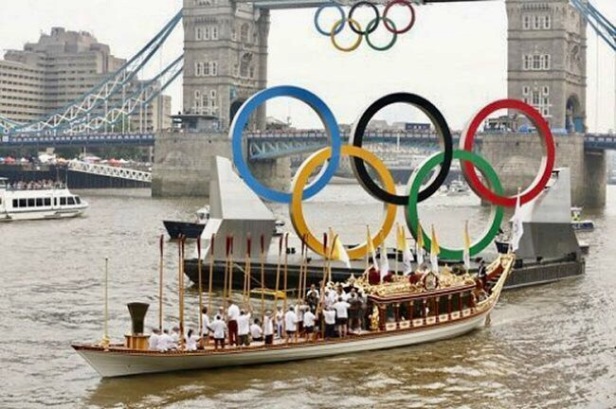 Gloriana also carried the Olympic Flame on the River Thames on 27 July 2012. 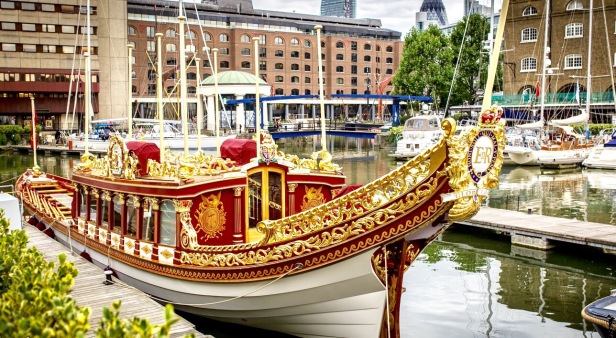 The Gloriana is currently based in St Katharine Docks, London, where she is kept and prepared for use.

The following 2 pictures and video were taken by me in Cookham, Berkshire on the River Thames 12 July 2017. 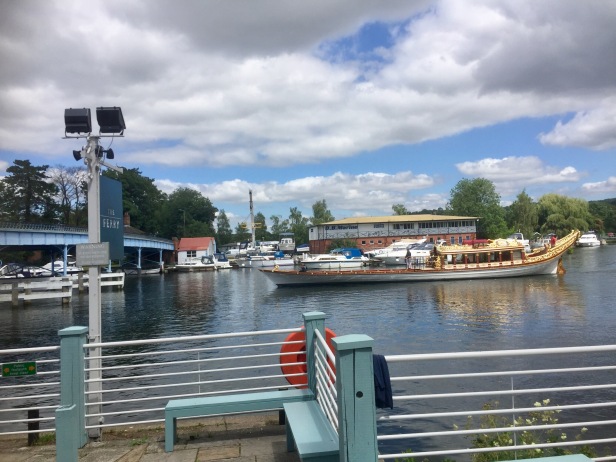 During the summer months, the barge can often be observed travelling between Central London and Henley on Thames, powered by its inboard motors. I saw the Royal Barge pass me-by during lunch at a riverside restaurant this week. It was a splendid sight.

[Photos courtesy of the Gloriana Trust and A J Wood]

The author, Andrew J. Wood, is a well-travelled travel writer and former hotelier. UK-born Andrew is a Skålleague, with over 35 years of hospitality and travel experience. He is a former Director of Skål International (SI); National President SI THAILAND; President of SI BANGKOK; and is currently Director of Public Relations, Skål International Bangkok. He is a regular guest lecturer at various universities in Thailand including Assumption University’s Hospitality School and most recently the Japan Hotel School in Tokyo. Follow him at http://www.ajwoodbkk.com